data source: http://stats.govt.nz/browse_for_stats/population/estimates_and_projections/SubnationalPopulationEstimates_HOTPJun11.aspx
5 days ago, Stats NZ released the first population data about a time after the Canterbury earthquakes in Feb 2011. Note that it is for June, just 4 months after the quake, and that things could have changed significantly between June and now. Here I make a few observations:
Now for a couple of things not specifically related to the earthquake:
In this image, the dark green areas are territorial authorities with declining populations (2006-2010), the light green have growing population but declining numbers of 0-14 year olds, gray areas have steady numbers of 0-14 year olds, orange has numbers of 0-14 year olds growing at less than 1% pa, and red areas have greater than 1% pa growth in 0-14 year olds. 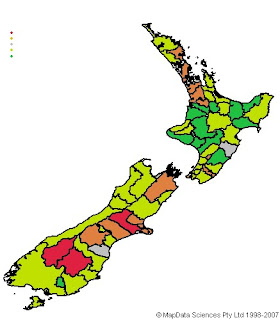 Posted by Pervach at 5:02 PM No comments: Links to this post

When you fly the Silver Fern flag, here is a list of the RWC 2011 teams you could be referring to:
When you fly the NZ national flag - the NZ Blue Ensign - here is a list of RWC 2011 teams you could be referring to, who have players or coaches from New Zealand:
In fact, there are only 8 teams you are NOT supporting when you fly the NZ Blue Ensign: Scotland, France, Italy, Georgia, South Africa, Namibia, Argentina, Russia.
This is (one reason) why people use the Silver Fern flag at the RWC and not the NZ flag. It doesn't mean they have adopted a different flag for New Zealand - just for a rugby team.
Posted by Pervach at 7:49 PM No comments: Links to this post